Taking the #4 spot on this Top 5 list is the promotion’s best ever heavyweight, and arguably the best the sport has seen – the current heavyweight champion, Stipe Miocic. The Cleveland favorite has enjoyed a phenomenal record this decade, since joining the Ultimate Fighting Championship back in 2011. Miocic’s emergence as the greatest heavyweight the promotion has ever had has been a long journey.

With just three division defeats, two of which he has since avenged, Miocic has set the record for the most consecutive successful title defenses with three, making him the most successful heavyweight in the organization. During his premier reign as division champion, Miocic was almost untouchable. After handing the incumbent champion, Fabrício Werdum, a crushing first-round knockout defeat in his native Brazil, Miocic went on a truly incredible run. In his three-fight streak as champion, Miocic battled past three of the division’s most frightening punchers. Alistair Overeem and former opponent, Junior dos Santos were both finished with opening-round strikes – before the terrifying, Francis Ngannou, was handed his first promotional blemish.

Surviving an early knockdown from ‘The Reem’, Miocic, backed by a hometown crowd, rallied to score a ground-and-pound win over the former DREAM, Strikeforce, and K-1 world champion. Having faced former UFC heavyweight champion, dos Santos, back in 2014, Miocic dropped a unanimous decision defeat, with the Brazilian entering the rematch holding prior supremacy. Within just two and a half minutes, Miocic had finished JDS with strikes.

Against Cameroon’s Francis Ngannou, Miocic was tasked with overcoming a challenger, who had just knocked Overeem, and Andrei Arlovski out in the opening round. Ngannou entered the contest as a favorite in many people’s opinion – but five rounds later, a glaring hole was exposed in ‘The Predator{s)’ overall game. Over the twenty-five minute affair, Miocic had survived Ngannou’s heaviest shots and landed an incredible six successful takedowns to score a dominant unanimous decision win and record-beating retention. 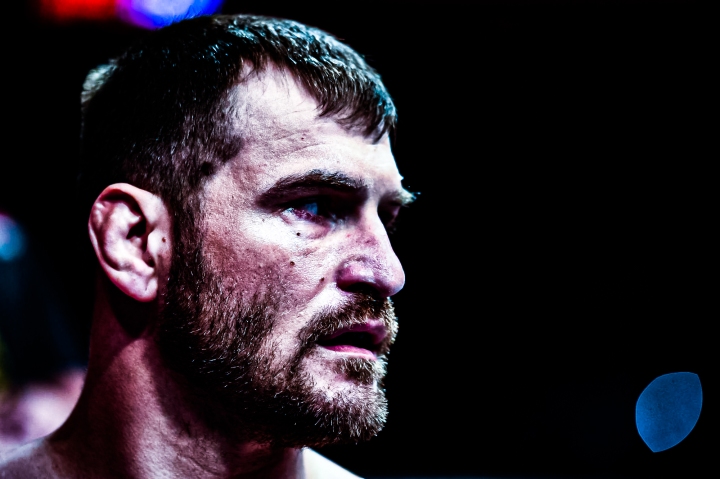 In Miocic’s recent fault to then light heavyweight champion, Daniel ‘DC’ Cormier, he attempted to prevent the wrestling-expert from claiming ‘Champ Champ’ status. Cormier had just finished Volkan Oezdemir with relative ease and would return to the 265-pound limit for the first time in five years since his victory over Roy Nelson. In an opening-round clinch exchange, Cormier landed a short right hand which dropped Stipe before Cormier began unloading with strikes from the top to find the stoppage.

In the pair’s rematch at UFC 231, Miocic avenged just the third loss of his career. Displaying some incredibly polished boxing, Miocic began ripping the body of Cormier from the second round onward, before hurting Cormier with a left hook to the midsection in the penultimate round before finishing with strikes at the fence. Miocic’s only other career defeats came against dos Santos, and Dutch submission grappler, Stefan Struve. Quite an incredible record.

Just taking a look at the résumé of Stipe Miocic is quite astonishing. Since his UFC debut all the way back in 2011 against Joey Beltran, Miocic has handed some of the sport’s best, devastating defeats. Gabriel Gonzaga, Fábio Maldonado, Mark Hunt, Andrei Arlovski, Fabrício Werdum, Alistair Overeem, Junior dos Santos, Francis Ngannou, and Daniel Cormier. For those recognizable names in his win column alone, and the longevity he’s had at the very top of the sport – Miocic takes the #4 rank in this Top 10 list.