Brazilian Flyweight contender Jussier Formiga and I recently sat down ahead of his pivotal encounter with compatriot Deviveson Figueriedo he currently holds the #1 rank in the flyweight division, and with this ranking comes the possibility of a move to Bantamweight, we discussed his past with champion Henry Cejudo, the prospect of another ‘super fight’ and his big plans for the coming year.

Brazilian Jiu-Jitsu expert Formiga has gazumped the likes of Sergio Pettis, Ben Nguyen and Ulka Sasaki on his current tear and looks to earn a rematch with former foe Henry Cejudo after their razor thin 2015 decision, with a victory over the undefeated division climber Deiveson Figeuriedo. A victory over his fellow countryman has no doubt make the 33 year-old undeniable in terms of a title shot, whether that be at Flyweight or if it would spell the birth of a Bantamweight run.
Speaking with the Natal native, he spoke of his desire to finally earn his premier title shot in the promotion against one time opponent Cejudo. “At the moment I’m in quite the position but I really want to prove to everyone that I am the number one contender in the division and I will fight for my dream. I want to prove to Cejudo that I am the true champion, the last time we fought we had a very tight fight.” Handing the surging Figueriedo his first ever defeat is no mean feat given his well rounded game and explosive power for the weight class, but a confident Formiga believes he can get the job done this Saturday night, ahead of running it back with ‘The Messenger’. *Note this interview was recorded before Formiga won at UFC Nashville against Figueriedo*
Jussier spoke of his reluctance to face a fellow Brazilian but knows a win over Deiveson Figueriedo is a must if he wants his first tilt. “Deiveson is a great opponent, I never like to face  Brazilian, but unfortunately he is in my way.” Rumours have be rife of the potential axing of the 125lbs division since late 2018, something Formiga is confident won’t occur. “I’m sure the division won’t end, we have so much potential, and more potential for the division to grow.“ 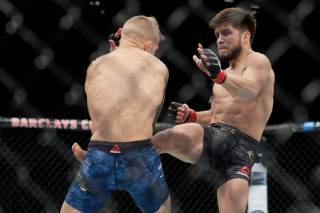 The UFC and more so T.J. Dillashaw, are keen on booking another ‘super fight’ between Cejudo and himself again at Flyweight, which would subsequently hold up both divisions with hungry challengers present on a huge scale in both. Formiga’s thoughts on this issue were stern. “I think there is a real lack of respect for the two divisions, I hope to prove that I  will be the next contender so that this (rematch) can’t happen.“