The current Heavyweight division is home to some of the heaviest hitters in recent memory with two of the most prevalent boxers of the weight class clashing this Saturday night as fan favourite Derrick ‘The Black Beast’ Lewis squares off with former world champion Junior Dos Santos in the main event of UFC Fight Night Wichita in the organisation’s first ever trip to Kansas.

Seeing his three fight win streak snapped in his unsuccessful shot at the Heavyweight crown, at the hands of Daniel Cormier, Lewis is looking to rebound into title contention with a win over the surging ‘Cigano’, who has put together an eye catching two fight win streak, beating both Blagoy Ivanov. Then in spectacular fashion, halted the progression of the exciting Tai ‘Bam Bam’ Tuivasa in Adelaide. Both Lewis and Junior are supremely dangerous with both fists but often it’s not just said hands which they rely on to find the finish. Despite being one dimensional to a certain extent, both men have the ability to smash the lights with just one shot.
Louisiana’s Derrick Lewis has seen an incredible surge in popularity in the last couple of years, thanks to his hilarious Instagram page and radical slap-stick style post fight interviews. Lewis has become something of an internet meme after stopping fellow contender Alexander Volkov in the closing seconds of the final round of their October 2018 clash, he was down on all three judges scorecards. Yet the heavy hitting Lewis was also involved in a rather lackluster match up with another power house that year against Francis Ngannou. Both men were, well to put it a polite way, very tentative throughout their three round clash with significant strikes being few and far between as Lewis scored a decision victory. 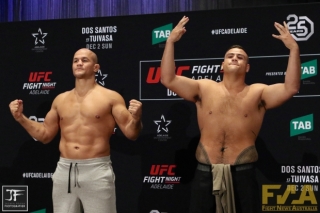 Former division kingpin Junior Dos Santos has seen quite the resurgence in what could be seen as the heyday of his mixed-martial arts career, securing two consecutive wins. JDS ran it back with Stipe Miocic for the Heavyweight crown back in 2017, Junior was stopped convincingly in the opening round but may find himself one win away from his fourth title tilt. ‘Cigano’ served as the welcoming party to former World Series Of Fighting champ Blagoy Ivanov, and handed the behemoth his first defeat in almost five years by way of a unanimous decision. One man making big waves throughout the division in 2018 was Tai Tuivasa, and when pitted with Dos Santos in his first promotion headliner, the Tuivasa wave came crashing down. Junior althroughout the battle displayed his ever technical boxing,  and finished ‘Bam Bam’ in the second round, earning him the #8 rank in the division.

No doubt, Junior has been stopped in some dramatic fashion before. Losses to Alistair Overeem and his trilogy with Cain Velasquez, particularly the rematch and subsequent rubber match spring to mind, forcing us to question the Brazilian’s ability to take a shot, apparent in suffering his last stoppage loss to the aforementioned Miocic two years ago, although those three are more technical strikers than Derrick Lewis, one shot from ‘The Black Beast’ is more than often detrimental. Dos Santos is more technically proficient than Lewis, who himself has been stopped via strikes on three separate occasions so this one ultimately comes down to who can land first. I’m taking Derrick Lewis in this clash.