The world of MMA can change in just an instant. One wrong move, faint or flinch and everything we think we understand about the world comes crumbling down before our very eyes. Have you ever heard of the Multiverse theory ? If you haven’t; it basically states that our reality is infinite, meaning infinite possibilities. Time and existence is on a never ending loop (Imagine Rick & Morty). So hypothetically speaking, there’s infinite versions of you wandering around somewhere in an alternate version of the milky way.

So I would like to ponder what a world in which one wrong move actually occurred; a world in which Gegard Mousassi is the UFC Middleweight Champion, and it all traces back to Jon Jones vs Vitor Belfort.

Our frightful tales begins in 2012; the night is September 22nd. Long before the average “Just Bleed” supporter had ever heard of USADA, Vitor Belfort has just been granted permission to inject himself with the amount of testosterone only found in male gorillas in the midst of a mating season. Using this, he has amassed enough wins to grant himself a shot at the LHW strap, he stands opposite Jon Jones. The bell clangs.

In the first round, Vitor appears overmatched; getting pummelled to an oblivion from elbows, however when all hope seems lost for ‘The Phenom’ he manages to locks in an arm-bar from the bottom. Miraculously, Vitor feels a tap, Vitor is crowned the new UFC LHW champion.

After claiming the crown, a rising challenger in Dan Henderson emerges, Henderson comes into the fight being too overly aggressive in the opening round, getting repeatedly tagged from Vitor’s knees and elbows strikes. Henderson gets clipped hard with a right uppercut, causing him to flop lifelessly to the floor. 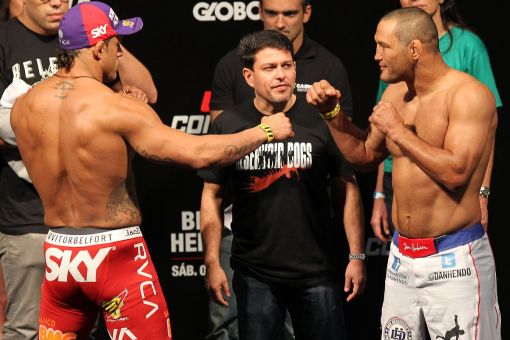 However, at this point USADA is in the mix, so Belfort puts down his juice box, (We imagine Belfort has a Steroid cellar in his house instead of a wine one) just in time for a new challenger, in a reborn Gegard Mousassi. A true veteran of the sport, Gegard takes full advantage of a newly flabbed Vitor, by dominating Belfort to earn a second round TKO in just his first UFC title shot.

The UFC then went on to sign a new seven figure, multi fight deal with Gegard, as they wouldn’t let their Champion just walk away. The ever improving Mousassi then dispatches two more victims, in Robert Whitaker and ‘The Soldier Of God’ Yoel Romero.

We are now in the year 2019, and Gegard Mousassi is set to face Kelvin Gastelum at UFC 234, and all of this, because Vitor Belfort made Jon Jones tap out.